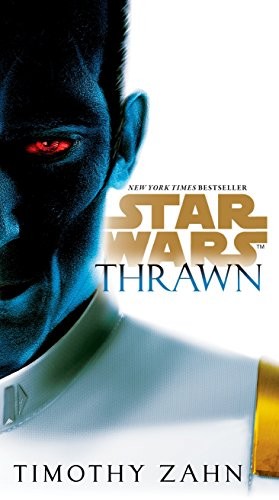 It’s been about 20 years since I last read anything set in that universe, and having been out-of-the-loop of the canon for over a decade made the prospect of wading back in too daunting.

But then Disney bought the Star Wars franchise, and declared that all of the Expanded Universe stories were no longer canon — the EU would start over, and only books published post-acquisiton would be canonical. Throwing away over 20 years of stories has angered some longtime fans, but they’ve at least left the door open to bringing some characters from the old EU into the new canon. They’ve done just that with fan-favorite villain Grand Admiral Thrawn, originally introduced in Heir to the Empire, and that piqued my interest enough to take a look at Thrawn.

The story follows the future Grand Admiral as he becomes acquainted with the Empire and rises through its ranks. Accompanying him in his adventures is fellow naval officer Eli Vanto. Narratively, Thrawn and Eli make a good combo, as each can serve as a sort of excuse to have things explained to the audience without it feeling forced (Thrawn, as someone new to the Empire, needs frequent explanations as to how the Empire works, and Eli gives Thrawn a good excuse to explain his thought process and tactics).

I found the story to be compelling, even when it turned towards the politics and bureaucracy of the Star Wars universe (which the Prequel Trilogy famously struggled with). The battles are exciting, and Thrawn’s cunning, tactical mind really shines.

The main miss for me were Thrawn’s monologues, talking to no one in particular and about nothing in particular, that account for the beginning of most chapters. I imagine they are supposed to provide more insight into the character’s head — and indeed the first couple of them were fine in that regard — but by the end of the book they were just tedious.

Thrawn is very much complementary to the (excellent) animated series Star Wars Rebels, the later seasons of which introduce Thrawn as a recurring antagonist. In additional to following Thrawn’s rise through the Imperial navy, the book also spends a significant amount of time detailing the life of Arihnda Pryce, who ascends to become the Governor of Lothal (the home planet of Rebels' protagonist). While Rebels definitely isn’t required viewing in order to enjoy this story, I definitely felt like the book added additional depth to the series and vice-versa. Without spoiling Thrawn or Rebels, one revelation in particular about Thrawn’s motivation makes the character’s situation at the end of Rebels especially interesting when considering where future media may take the character…

I listened to the audiobook version of Thrawn. Marc Thompson does an excellent job, giving each character a distinct and recognizable voice, and his Thrawn voice is close enough to how Lars Mikkelsen voiced the character on Rebels to not be jarring. Coupled with the traditional Star Wars soundtrack and sound effects, it really feels like listening to a radio drama. This was a really enjoyable way to experience the story, and I definitely think I’ll prefer the audiobooks for future Star Wars books.